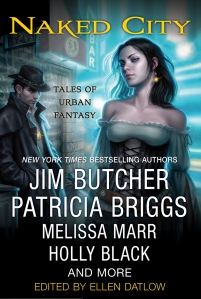 A few days ago Naked City: New Tales of Urban Fantasy hit the shelves. This one features “The Way Station,” which is kind of like my farewell-to-New-Orleans story. This book has been a long time coming, and I’m glad people will finally get a chance to read it.

This one is special to me, for a couple of reasons. In some ways it’s about how the city haunted me for years after leaving, and how hard it was to let it go. I’ve said before, perhaps excessively, that New Orleans was the first place I truly felt at home. It still makes up a large part of my heart’s country. Beltrane, is loosely based on a homeless man named Sunbeam who used to come into the Pub. He was dearly loved by the regulars, ad when he passed away it was a hard day for more than one of us. Sunbeam will soon be getting a post of his own here; he wrestled bears in his youth, after all (a detail which does not appear in the story).

This is also the first story I ever wrote as a love letter to a woman. Every sentence was spun by her eyes in my mind. I wanted it to be beautiful for her. Perhaps it’s an odd love letter — but I’m not a particularly normal man.

So this one has special relevance to me for these reasons. Looking at the cover art, I can’t help but think readers diving in for Dresden Files-type stories will be baffled or frustrated by it. But it’s a good one, I think, and I’m proud of it.

“I was haunted once too,” Davis says quietly. “Then the ghost went away.”

Beltrane stares at him with an awed hope as Davis slowly fishes through his pockets for a lighter. “How you get rid of it?”

Davis lights both cigarettes. Beltrane wants to grab the man, but instead he takes a draw and the nicotine hits his bloodstream. A spike of euphoria rolls through him with a magnificent energy.

He feels a cramp in his stomach. His joints begin sending telegraphs of distress. He can’t let this happen. “Fuck you. I’m leaving.”

Davis is still as Beltrane hoists himself out of his chair. “The shelter won’t let you back in. You said it yourself, you gave up the bed when you left. Where are you going to go?”

“Will she? With streets winding through your body? With lamps in your eyes? With rain blowing out of your heart? No. She will slam that door in your face and lock it tight. She will think she is visited by something from hell. She will not take you in.”

Beltrane stands immobile, one hand still clutching the chair, his eyes fixed not on anything in this room but on that awful scene. He hasn’t seen Lila’s face in twenty years but he can see it now, contorted in fear and disgust at the sight of him. He feels something shift in his body, something harden in his limbs. He squeezes his eyes shut and wills his body to keep its shape.

7 thoughts on ““The Way Station” is a love letter”