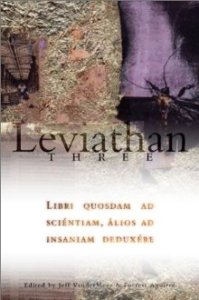 Jeff and Ann VanderMeer are gearing up for the fifth volume in the astonishing Leviathan series of anthologies. All four volumes occupy a position of pride on my shelves. It is through these books that I first encountered the beautiful and exciting work of writers like Stepan Chapman, Michael Cisco, Rikki Ducornet, Ursula Pflug, and Rhys Hughes. They are like nothing else I’ve read, and I believe they were instrumental in kicking open a lot of doors in our corner of the fantasy genre. Although they never received as much press, I remain convinced that they were as influential on the tenor of the field as Dangerous Visions, although their influence was more subtle, seeping into the groundwater and changing not just how we want to write imaginative fiction, but how we define it.

Jeff and Ann have decided to focus the fifth volume on newer writers, “probably defined as writers with two or fewer books published in English.”

Note that last clause. To wit:

“We are going to do something fairly unprecedented in the history of genre and have between 15 and 20 associate/foreign language editors in other countries so that many writers who do not write in English would be able to submit. Up to 30,000 words of the 100,000 words might be fiction newly translated for Leviathan 5.”

To help fund this endeavor, Jeff is diverting all royalties from his short story collection The Third Bear and his forthcoming nonfiction collection Monstrous Creatures to the project.

One of the things I have always admired about Jeff and Ann is their full commitment to their ideals. This is a perfect illustration. This anthology is deserving of your full attention.

Direct donations are also possible. Go here to get all the details you’ll need.

2 thoughts on “Leviathan 5 is coming”